Fanteles are tiny (around 15 cm tall) and chubby elephant hybrids (weigh around 40-45 grams). They are found everywhere in almost every world. One of the main characteristics of fanteles, and what make having one as a friend a great honor, is their capacity of consuming bad energy through their trunks and releasing a comforting aura. Fanteles can be pretty diverse, but there’s a set of characteristics that they all have: small and chubby legs, small wings, and squishy floating horns, that can rest in their eyebrows. The eyebrows and horns are always the same color. 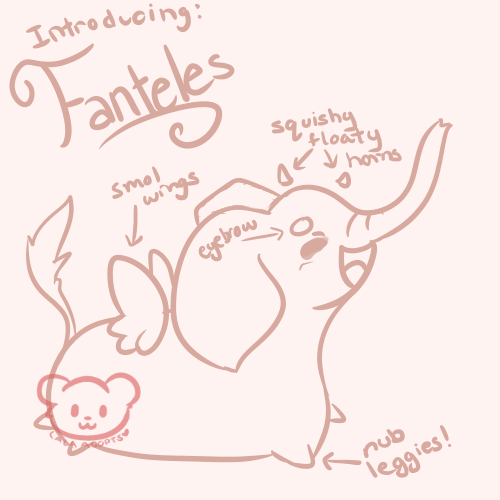 No one really knows how fanteles appeared, but it’s safe to guess that a great amount of magic was involved in the process, as to explain their magic abilities. Fanteles don’t answer to any kind of magic except fantele magic, so no spell or potion work in this mysterious species.

Their lack of answer to magic means most species don’t know how to analyze fanteles, and as such there’s little information about how fanteles work. One of the only known processes that happen in a fantele body is how the bad energy become their comforting aura, and it was told by many fanteles themselves. Fanteles’ horns work like feelers and can sense the bad energy, that they actively consume through their trunks. What happens from there is not so clear but it’s know that the bad energy finds its way to their horns where it’s transformed into good energy (that usually is perceived as a comforting aura) and can be released whenever the fantele wants.

Fanteles came from a little world called Alana, no one is sure exactly where in this world, as they can be found in every continent and island. Alana has weak magic spots that could allow the travel to other worlds. To prevent those spots from being abused, several magical barrier were created around them, preventing anyone from using them to travel to other worlds. Since magic can’t affect fanteles, they are the only known species capable of using those spots to travel anywhere they want, and so fanteles can be found in almost every world.

Fanteles are a social species and they can’t live well alone. When not living with other fanteles, they tend to live closer to other species, that they can use to feed on their bad energy. It is considered a great honor to be chosen as a companion by a fantele. Fanteles don’t choose their companions based on who has more bad energy, but in how much they like that person. Many people construct shelter and leave some tasty normal food (that fanteles can eat without problem!) for fanteles, in hope that the fanteles will like it and decide to feed on their bad energy.

When fanteles aren’t living with a companion of other species, they tend to live in groups of up to 10 fanteles. These groups are usually nomadic, feeding on the bad energy of every town they stop by. They usually have one leader, the strongest fantele in the pack. Those fanteles sleep either in shelters made by other species or inside trees, caves or other natural shelters.